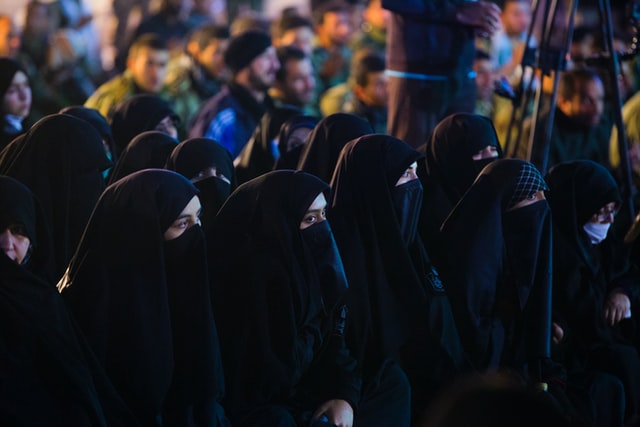 Last week, we started a new study on the mission of God, considering how God originally made man in his own image and commanded them to spread out across the face of the earth. We contrasted this with the Great Commission in Matthew 28 and asked the question: Has God’s mission changed? What do we see to be similar or the same between this initial command to multiply and fill the earth and that of Jesus to make disciples among all nations?

You can go back and read that post using the link above, but in summary, we found these two ideas to almost be exactly the same. This means that God is on the same mission today that he has been on since the beginning!

This week, we continued with our study of God’s mission, working to understand more about with whom, or among whom, God is working to accomplish his mission. To do this, we borrowed a component of a study from Frontiers called Embark and looked at 9 different scriptures, moving from the beginning of the Bible to the end to understand how God’s plan has remained the same regarding who he intends to reach and bring to himself.

The LORD had said to Abram, “Go from your country, your people and your father’s household to the land I will show you.

“I will make you into a great nation, and I will bless you;
I will make your name great, and you will be a blessing.
I will bless those who bless you, and whoever curses you I will curse; and all peoples on earth will be blessed through you. ”

Then the LORD said to Moses, “Get up early in the morning, confront Pharaoh and say to him, ‘This is what the LORD, the God of the Hebrews, says: Let my people go, so that they may worship me, or this time I will send the full force of my plagues against you and against your officials and your people, so you may know that there is no one like me in all the earth. For by now I could have stretched out my hand and struck you and your people with a plague that would have wiped you off the earth. But I have raised you up for this very purpose, that I might show you my power and that my name might be proclaimed in all the earth.

Now we skip forward to the story of Moses. He is now confronting Pharaoh telling him that God says that he must let his people go out of Egypt. God’s desire is that his people will worship him, and to do this, they must leave Egypt. Moses is commanded to give a warning to Pharaoh that he should either let the people go or face a punishing plague such that he couldn’t even imagine, even wiping them from the face of the earth.

God also says that Moses should tell Pharaoh that he has put him in this position to show his power and that his name would be proclaimed in the earth, something that many people continue to even do today as we talk about this story.

He makes wars cease
to the ends of the earth.

He breaks the bow and shatters the spear;
he burns the shields with fire.

David writes this Psalm talking about the power and strength of God while also worshiping him as a God who brings peace among the people. For this, David says that God calls us to be still and know that he is God, that he and his ways will be lifted up. He will be worshiped and exalted among all of the nations on the earth.

And now the LORD says—
he who formed me in the womb to be his servant
to bring Jacob back to him
and gather Israel to himself,
for I am honored in the eyes of the LORD
and my God has been my strength —
he says:

“It is too small a thing for you to be my servant
to restore the tribes of Jacob
and bring back those of Israel I have kept.
I will also make you a light for the Gentiles,
that my salvation may reach to the ends of the earth.”

The prophet Isaiah points forward to Jesus, talking about how he will restore the tribes of Israel (Jacob) once again bringing them back to himself. But Isaiah also explains that, for God, this isn’t enough. He will also make him a light for the Gentiles. In other words, all other people as well, not just the Jewish people. The Jewish people had been God’s chosen people with their heritage line coming down from Abraham, Isaac, and Jacob, and God had promised blessing for Abraham, but the blessing wouldn’t only be for Abraham. This blessing would come to all people. Now, Isaiah is pointing forward to Jesus to show how, from the Jews, the blessing of God would come upon all of the other people on the earth as well!

Once again, the prophet Malachi confirms God’s plan. He will be the last of the prophets and he reminds the people that God’s name will be great among the nations. This is one of the final messages before God goes silent for 400 years without more word from him to the Jewish people until Jesus arrives on the scene.

Moved by the Spirit, he went into the temple courts. When the parents brought in the child Jesus to do for him what the custom of the Law required, Simeon took him in his arms and praised God, saying:

“Sovereign Lord, as you have promised,
you may now dismiss your servant in peace.
For my eyes have seen your salvation,
which you have prepared in the sight of all nations:
a light for revelation to the Gentiles,
and the glory of your people Israel.”

Now we move into the story of Jesus. He has just been born within the last few days and has been taken into the temple for consecration and circumcision before the Lord. A man named Simeon takes Jesus in his arms and prophetically proclaims God’s plan for Jesus in front of everyone. He says that Jesus is God’s salvation for all nations and a light for the Gentiles. He even says that this child is the glory of the Israelites. Why would that be? Because Jesus is a Jew and comes from the Jewish people, just as we understood that he would as we learned about God’s blessing of Abraham above!

He told them, “This is what is written: The Messiah will suffer and rise from the dead on the third day, and repentance for the forgiveness of sins will be preached in his name to all nations, beginning at Jerusalem. You are witnesses of these things.

At this point, Jesus has died on the cross and has been resurrected from the dead. He now appears to his disciples and explains to them what has happened. He says that the reason for his suffering and death, and for his resurrection on the third day is that forgiveness of sins is to be preached to all nations. It is now possible for all people to come to God because Jesus paid for the sins for all of them. This starts in Jerusalem, but extends to all people!

Scripture foresaw that God would justify the Gentiles by faith, and announced the gospel in advance to Abraham: “All nations will be blessed through you.”

The Apostle Paul, writing a letter to the churches in Galatia, explains that they don’t need to follow the law of the Jews as the Judaizers have told them that they must do. Instead, he says that it is through faith that the Gentiles would be saved. God would make the Gentiles right with him (justify them) through their faith in Jesus. Paul says that this has been God’s plan since the time of Abraham right up to the present day.

After this I looked, and there before me was a great multitude that no one could count, from every nation, tribe, people and language, standing before the throne and before the Lamb. They were wearing white robes and were holding palm branches in their hands. And they cried out in a loud voice:

“Salvation belongs to our God,
who sits on the throne,
and to the Lamb.”

Finally, we reach the end of the story. All of the nations with their individual tribes and languages are gathered around the throne of God. God, in his varying persons, is being worshipped by all of the nations for having been saved by his great love and sacrifice.

So we have gone through each of the scriptures above, but now let’s answer a couple of questions that we also posed to the folks in our studies this week:

What does this teach us about God and his plan for the world?

In summary across each of the scriptures above, I think it is fair to say that God has been working out a plan to bring blessing to all people everywhere. He started this process through Abraham and continued to work out his plan until it was finished at the end.

But what does this word “blessing” mean? Is God talking about financial riches? Great relationships? Power? No, this is not it. In fact, we often see that the people who have been blessed by God experience the opposite. They may experience suffering, persecution, and many trials.

Instead, I think that we see a significant part of the answer to this question in the final verse from above. It said, “Salvation belongs to our God, who sits on the throne, and to the Lamb.” God brings salvation to all people. He saves them all. Not just the Jews, his originally chosen people. Not just certain people. But all that will place their faith in Jesus and his sacrifice for their sins.

I said that this, the salvation that God has given, is a “significant part of the answer” because, while this is the greatest component, we do experience great joy as we see God carrying out his plan, both in us and through us for the benefit also of other people.

As God is carrying out his plan to redeem all nations across the world, to bring salvation to everyone, we see that God uses his people to complete the task. So I need to understand where I stand in joining God within his plan. He is bringing salvation to all nations. Am I willing to go to my neighbor who is from another country to get to know him and share this word of salvation with him? Beyond being willing when God calls me, will I actually do it? If God brings someone to mind, will I meet them and share with them, committing to working to making them a disciple of Jesus Christ?

Here are the questions that we used in our training studies this week:

What do you give thanks to God for from this last week?

What do you need prayer for in this week?

How have you obeyed God in this last week?

What do these scriptures teach us about God and his plan for the world?

What does this teach me about my part in God’s plan?

What change does this make in us? What do you want to do in response?