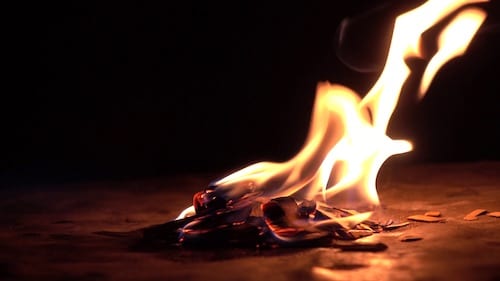 While it is a difficult metaphor given the global news about wildfires recently, I think it is probably the most appropriate given what we want to try to communicate.  Our eventual goal is to see a “wildfire” of disciples making disciples in each area where we are working, but we we want to think clearly about most effective way this can be done.

From a scriptural standpoint, here are a couple of things that we can see that Jesus and the disciples did as he was starting his own movement of disciples:

First, in Luke 10, we can see that Jesus sent his disciples into all of the towns where he was about to go.  In other words, Jesus is about to start visiting those towns to announce and demonstrate the kingdom of God.  It seems that he hoped to see new homes that would accept the message and the messengers even before he arrived.

Next, in the first instruction to his disciples as he sends them out, he says that they should be praying for workers for the harvest.  Jesus says that there is plenty to do because the harvest is plentiful.  So it is clear that they need more workers.

Third, as they enter that town, they are to find a house that will accept them.  Jesus says that they are to stay there with them and not move around from house to house.  He didn’t really explain why they were to do this, but given the earlier instruction, I think that the idea is that these new houses would eventually be the workers to reach that town, or that area.

Now, from a strategic standpoint, we can look at places around the world that have seen and experienced this “wildfire” or movement of disciples.  How have they done it?  While there are many different ways that this has been done, generally speaking, what we have learned is that an “outsider” to the culture connects and partners with an “insider” to the culture.  The outsider and the insider have different roles, but work toward the same ultimate goal to make disciples in that area and among the local people.

Why would this be a good combination for the purpose of making disciples?  Primarily because, while the insider knows the language, the culture, and the mentality of the people where they live, they often don’t have a broad vision for what God may want to do, nor tools to help them make disciples in a way that others can easily reproduce what they are doing.  Meanwhile, the outsider may have a fresh perspective and vision for what God wants to do in an area, and may even also have tools to make disciple-making reproducible.  However, what they don’t have is a native connection to the local language, the local culture, and the local mentality.  No matter their level of contextualization, they themselves will never reach the level of being considered a local, and in fact will always be considered an outsider, thus their message is considered to be a message from the outside, not a message that can be widely accepted as coming from an insider within a culture.

Therefore, this “Outsider / Insider” partnership becomes crucial for seeing a movement of disciples, and I believe that if we look at the Biblical Perspective and the Strategic Perspective, we can see that there is a lot of similarity.  Jesus sent in his “outsiders” who were not from the town that he sent them to, to find the “insiders” within the town.  Those insiders would now ostensibly become the people that would carry the message, or at the least, host the messengers.

So now we come to the So What? part of the post.  The question that we want to ask now is, “How do we find these ‘insiders’?”  How can we find these people who will carry the message of God’s grace and mercy through Jesus into their town, or to their people and culture?

Well, where we are working, there is a small population of people who follow Jesus.  However, there are enough within the various cultures represented here that we believe that we, as the outsiders, can find and train people among those who already follow Jesus and look for leaders to emerge.  Of course, we will also look for those who do not follow Jesus, yet are spiritually hungry and want to receive this same grace and forgiveness for themselves, training them also in the hope that we will see leaders emerge.

Regardless of their background, as we train, we will identify these new insider leaders based not on their knowledge, but on their faithfulness and obedience to go forward and do what Jesus taught us to do.  Jesus himself told his disciples that, if they love him, they will obey his commands, so we want to look for those who will learn what he said to do and go do it.