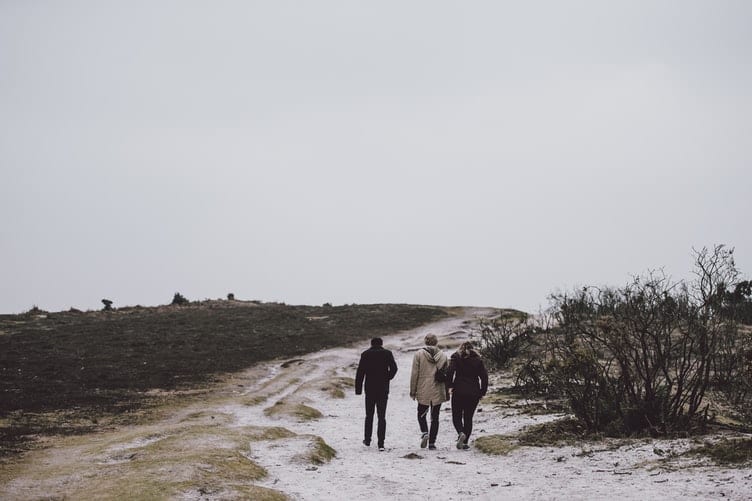 In Acts 15, after Paul and Barnabas had returned from their first journey, they stayed in Antioch for some time, sharing what God had done during their missionary journey. While they were there, some men had come from Judea – probably directly from the church in Jerusalem – and were preaching that the churches must continue to follow the law of Moses to be saved. This meant, for example, that the men in the churches must all be circumcised. Paul and Barnabas debated them, but ultimately didn’t come to a resolution, so they decided to appeal to the apostles in Jerusalem for a ruling on this issue.

In addition to Barnabas accompanying Paul in going to Jerusalem, Paul later says in Galatians 2 that Titus, who was probably from Antioch, went with him to Jerusalem as well. It appears that Paul’s goal in this trip is to not only have a ruling on the specific issue of circumcision, but also to confirm that the freedom in Christ that Paul believes in and has been preaching is the same message that the apostles believe and are teaching as well. It seems that the teaching from these men from Judea have thrown that into doubt for him, so he wants to confirm that they are all “on the same page” in a sense.

Having previously discussed Peter’s encounter with Cornelius and his household having received the Holy Spirit, the apostles see that God is continuing to have many more Gentiles come into the Kingdom of God, believing in Jesus. As a result, they write a letter to the churches explaining that, yes, there are certain practices that should be avoided, such as eating food that has been sacrificed to idols, from various kinds of sexual immorality, eating meat from strangled animals, or drinking the blood of animals (yuck?). But absent, of course, is any requirement that they will need to be circumcised.

As a result, Paul’s message is vindicated and it is confirmed that his Gospel message that Christ is for everyone, setting the requirements and weight of the old law aside. Paul and Barnabas initially take this letter back to Antioch with two men sent from the apostles to confirm its authenticity and then continue teaching in Antioch for some time.

Paul has an idea to go back and encourage the churches, but he and Barnabas separate over a disagreement over whether or not to take John Mark with them given that he had left them early-on in their last journey. So Barnabas takes John Mark and goes to Cyprus while Paul decides to go north by land route to Syria and Cilicia to visit and strengthen the churches there.

Like me, you may be wondering where these churches in Syria and Cilicia came from given that Paul is visiting them, and the letter from Jerusalem addressed them specifically. We don’t know precisely, but there are several important things that we can say that show that, despite us not seeing that Paul specifically started these churches, we know that he was there and active in sharing the Gospel.

So, having traveled to these churches and strengthening them, Paul now heads back up to the churches that he started in Asia Minor, the Galatian churches that he had started on his last trip. Paul delivers the message from the apostles in Jerusalem and the churches were encouraged and continued to grow.

Along the way, Paul meets a man named Timothy that the churches recommended and takes him along with him. Interestingly, especially after all of the disagreements with the Jews about circumcision having just wrapped up, and even on this trip delivering the message of the letter from the apostles in Jerusalem, Paul decides that he should circumcise Timothy who was a Gentile to make it easier to approach the Jews that they would be meeting. Nothing would stand in the way of the Gospel going forward!

As they continue to travel to the west, they go through several areas, but land momentarily in Troas, which appears to be the hometown of Luke – the writer of the Gospel of Luke and the book of Acts – because suddenly in chapter 16, verse 10, the pronoun switches to from “they” to “we”, and so now it appears that Luke begins to travel with Paul and his team.

While there in Troas, Paul has a vision of a man calling him from the district of Macedonia which he interprets to be a call for them to come share the message of the Gospel, so immediately they leave and head off to Macedonia, landing in the city of Philippi, now part of modern-day Greece and their first landing in what we now call Europe.

Two very significant things happen in Philippi. First, Paul and the team would regularly go outside of the city next to a river, a place that people would regularly gather for prayer. The first time that they went, they met Lydia, a Gentile woman, and some other women. In sharing the Gospel with them, Lydia believed and invited them into her home, starting a new church there in Philippi.

Paul and Silas had been beaten and chained while in prison, but in the middle of the night, a violent earthquake came, shook their chains loose, and opened the doors. The jailer would lose his life if he had lost any of the prisoners, but despite all of the chains being loose, the prisoners had stayed. Through this, Paul shares the Gospel with the jailer who believes in Jesus, and both he and his household were baptized in that night.

After having been appeased by the magistrates and city leaders for imprisoning them against Roman law, Paul leaves Philippi, probably leaving Timothy and Luke there to continue the work. Taking Silas, he continues his journey to Thessalonica where he again preaches in the synagogue, this time for three weeks. Some Jews, and a large number of Greeks believed. Among those that believed were Aristarchus and Secundus who would later travel with Paul as part of his team of leaders.

However, again, similar to some previous that they visited cities, some of the Jews were jealous that they were making disciples of Jesus among the people. They whipped up a mob and went to Jason’s house where Paul and team were staying while in Thessalonica. They didn’t find them, but ultimately Jason found himself in trouble for housing Paul and his team and had to post a bond to be released from prison.

Paul and Silas then escaped in the night and moved on to Berea. They preached again in the synagogue and many believed, including Sopater who like Aristarchus and Secundus from Thessalonica, would also join Paul as part of the leadership team in the future. But the Jews from Thessalonica followed them and stirred up a crowd yet again against Paul and their team in Berea so the believers sent Paul on to Athens while Silas and Timothy stayed there in Berea.

While Paul was in Athens, he saw all of the Greek gods in the marketplace along with the temples dedicated to them, so he would preach about the true God in the marketplace. He was invited to come to share with the Areopagus where we see a famous sharing of the Gospel with the Greeks. At this point, a few believed, but many did not, so Paul left them and moved on to Corinth.

While in Corinth, Paul shared the Gospel in the synagogue and works alongside of Priscilla and Aquila, tentmakers who came from Rome. Silas and Timothy join Paul in Corinth and after the Jews demonstrate that they will reject the message of Jesus as the Messiah, Paul moves on to the Gentiles and begins to baptize new believers among them.

Jesus speaks to Paul in a dream telling him to continue preaching in Corinth, so unlike many of the other cities, Paul stays there in Corinth for a long time, this time for a year and a half, but after having established the church there, he moved on to Ephesus, taking Priscilla and Aquila with him. Paul leaves Priscilla and Aquila there in Ephesus to continue the work there, and then soon returns back to Antioch, completing his second journey.