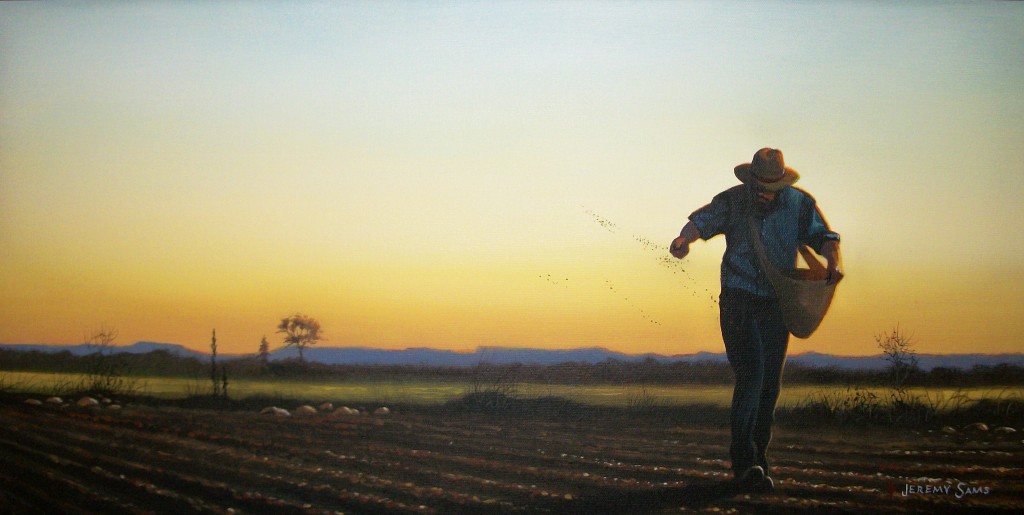 Jesus’s disciples asked him why he taught the people in parables instead of speaking to them directly and in a way that would be more plain to them. Jesus explained that the secrets of the kingdom of God were meant to be given to the disciples, but not to the rest of the people.

Today, I want to look at one of my favorite parables from Matthew 13, which you could call the parable of the sower or possibly also the parable of the four soils, and make a simple observation that I think that we can use in our disciple-making work.

Let’s start with the parable itself:

“A farmer went out to sow his seed. As he was scattering the seed, some fell along the path, and the birds came and ate it up. Some fell on rocky places, where it did not have much soil. It sprang up quickly, because the soil was shallow. But when the sun came up, the plants were scorched, and they withered because they had no root. Other seed fell among thorns, which grew up and choked the plants. Still other seed fell on good soil, where it produced a crop—a hundred, sixty or thirty times what was sown. Whoever has ears, let them hear.”

Let’s break this story down quickly into a few observations:

First, there is a farmer and he is sowing seed in an effort to produce a harvest.

We see that the farmer sows a lot of seed, but he does so pretty indiscriminately. He doesn’t seem to care too much, upon sowing the seed, where the seed lands. He doesn’t create rows or try to place the seed in precise locations as you might think a farmer would do.

The seed, in fact, lands on hard paths, on rocky soil, and even in the midst of thorns.

Only some of the seed lands on the good soil where it can produce a crop.

What is this farmer doing?

OK, so there are several things that we could say about this story, many of which we will cover in future posts. But for now, I want to make one simple point: The farmer is sowing the seed very broadly.

Jesus told his disciples that this is how the kingdom of God works. He spoke of a farmer who sowed seed that lands on hard paths, in rocky soil, and amongst thorns. He isn’t being careful to put the seed in specific areas. He isn’t even trying to prepare the soil in advance of sowing the seed.

I’ve heard stories in the past and retelling of work for the kingdom of God where people have said that they were working in hard soil, or soil that was so rocky that they had to go in and remove the rocks before the seed could be sown. Some people even said that they were “tilling” the soil.

But in Jesus’s description of the sower, you don’t see any tilling of the soil, nor removing of the rocks, nor uprooting of the thorns, nor and weeding of the ground prior to sowing the seed. This farmer just sows the seed.

How do we apply this parable to making disciples?

While this may not be a great plan for agricultural efforts, Jesus really isn’t talking about growing plants. These are the secrets of the kingdom of God. Jesus is talking about how God’s Word and the Gospel must be sown among all different types of people without regard for whether or not we believe the seed will grow in that particular person.

In this story, we are the farmer. We must sow the seed of the Gospel broadly, doing our part as sowers of the seed and allowing God to do his part to grow the seed into a crop of plants.

So here are some questions that we can use and ask ourselves, allowing the Holy Spirit to speak to us in our answers:

Now that you have considered these questions, consider what God may be asking of you. Is there anything that needs to change? What specific actions does God want you to take at this time? When will you put those changes into practice?