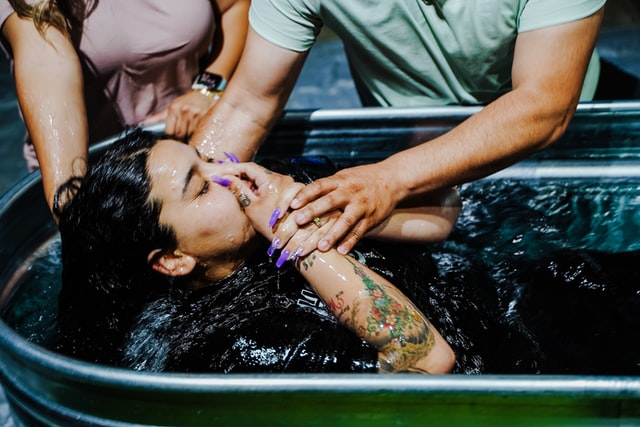 Over the last few years, I have found that one of the most spirited discussions that I could have with other Christians is that of baptism. To give you an example, here are some of the questions that we have discussed:

Who can baptize another person?

At what point should a person be baptized? How do you know that it is the right time for the person to be baptized?

How should they be baptized?

There are several more questions that we have discussed along the way, but some of these have illicited some of the longest and most challenging discussions.

Usually, the length and emotional nature of the discussion has to do with what one person in the discussion believes based on their traditions that they grew up with in their church, or what they had been taught, versus the teachings and experience of another. But for the purposes of this post, instead of looking to ourselves and our background and experience as the arbiter of the answer to these questions, let’s put the questions to the test based on what we see in the scripture.

Specifically, let’s look at what the disciples of Jesus who became the Apostles and Apostle Paul did in the book of Acts when they baptized other people. Presumably, we should be able to learn well from them as we can imagine that they would be doing baptism in the way that Jesus taught them to do it.

Here are the questions that we want to try to answer:

OK, so let’s go through each of scriptures. Hang in there while we take these one at a time:

“Therefore let all Israel be assured of this: God has made this Jesus, whom you crucified, both Lord and Messiah.”

When the people heard this, they were cut to the heart and said to Peter and the other apostles, “Brothers, what shall we do?”

Peter replied, “Repent and be baptized, every one of you, in the name of Jesus Christ for the forgiveness of your sins. And you will receive the gift of the Holy Spirit. The promise is for you and your children and for all who are far off —for all whom the Lord our God will call.”

When the crowds heard Philip and saw the signs he performed, they all paid close attention to what he said. For with shrieks, impure spirits came out of many, and many who were paralyzed or lame were healed. So there was great joy in that city.

Now for some time a man named Simon had practiced sorcery in the city and amazed all the people of Samaria. He boasted that he was someone great, and all the people, both high and low, gave him their attention and exclaimed, “This man is rightly called the Great Power of God.” They followed him because he had amazed them for a long time with his sorcery. But when they believed Philip as he proclaimed the good news of the kingdom of God and the name of Jesus Christ, they were baptized, both men and women. Simon himself believed and was baptized. And he followed Philip everywhere, astonished by the great signs and miracles he saw.

The eunuch asked Philip, “Tell me, please, who is the prophet talking about, himself or someone else?” Then Philip began with that very passage of Scripture and told him the good news about Jesus.

As they traveled along the road, they came to some water and the eunuch said, “Look, here is water. What can stand in the way of my being baptized?” And he gave orders to stop the chariot. Then both Philip and the eunuch went down into the water and Philip baptized him.

Then Ananias went to the house and entered it. Placing his hands on Saul, he said, “Brother Saul, the Lord—Jesus, who appeared to you on the road as you were coming here—has sent me so that you may see again and be filled with the Holy Spirit.” Immediately, something like scales fell from Saul’s eyes, and he could see again. He got up and was baptized, and after taking some food, he regained his strength.

While Peter was still speaking these words, the Holy Spirit came on all who heard the message. The circumcised believers who had come with Peter were astonished that the gift of the Holy Spirit had been poured out even on Gentiles. For they heard them speaking in tongues and praising God.

Then Peter said, “Surely no one can stand in the way of their being baptized with water. They have received the Holy Spirit just as we have.” So he ordered that they be baptized in the name of Jesus Christ. Then they asked Peter to stay with them for a few days.

On the Sabbath we went outside the city gate to the river, where we expected to find a place of prayer. We sat down and began to speak to the women who had gathered there. One of those listening was a woman from the city of Thyatira named Lydia, a dealer in purple cloth. She was a worshiper of God. The Lord opened her heart to respond to Paul’s message. When she and the members of her household were baptized, she invited us to her home. “If you consider me a believer in the Lord,” she said, “come and stay at my house.” And she persuaded us.

The jailer called for lights, rushed in and fell trembling before Paul and Silas. He then brought them out and asked, “Sirs, what must I do to be saved?”

They replied, “Believe in the Lord Jesus, and you will be saved —you and your household.” Then they spoke the word of the Lord to him and to all the others in his house. At that hour of the night the jailer took them and washed their wounds; then immediately he and all his household were baptized.

Then Paul left the synagogue and went next door to the house of Titius Justus, a worshiper of God. Crispus, the synagogue leader, and his entire household believed in the Lord; and many of the Corinthians who heard Paul believed and were baptized.

While Apollos was at Corinth, Paul took the road through the interior and arrived at Ephesus. There he found some disciples and asked them, “Did you receive the Holy Spirit when you believed?”

They answered, “No, we have not even heard that there is a Holy Spirit.”

So Paul asked, “Then what baptism did you receive?”

Paul said, “John’s baptism was a baptism of repentance. He told the people to believe in the one coming after him, that is, in Jesus.” On hearing this, they were baptized in the name of the Lord Jesus.

What can we conclude?

Now let’s look back over each of these and think about how we can summarize what we have read and learned based on each of these passages. Here goes:

Why were the people baptized?

Each of the baptisms were based upon their believing the message about Jesus. In addition, a couple of the situations included a message about, or having received, the Holy Spirit.

When were these people baptized?

Again, there is consistent response to this question. Each of the baptisms took place immediately upon having believed in the message of Jesus. There was no additional waiting or learning that took place in these cases. Repentance and belief are the only things that we can see was required for the people within these stories.

Where were they baptized?

I think we can essentially say that they were baptized where there was water. At times, we can see a body of water such as a pond or a lake. Other times, we can see a river within the story. Most of these stories took place prior to a church being developed, so it would be unlikely that these baptisms would have taken place within any type of church building.

Who baptized these people?

The apostles, or those that they appointed, baptized these new believers.